The Origin of MIG Training 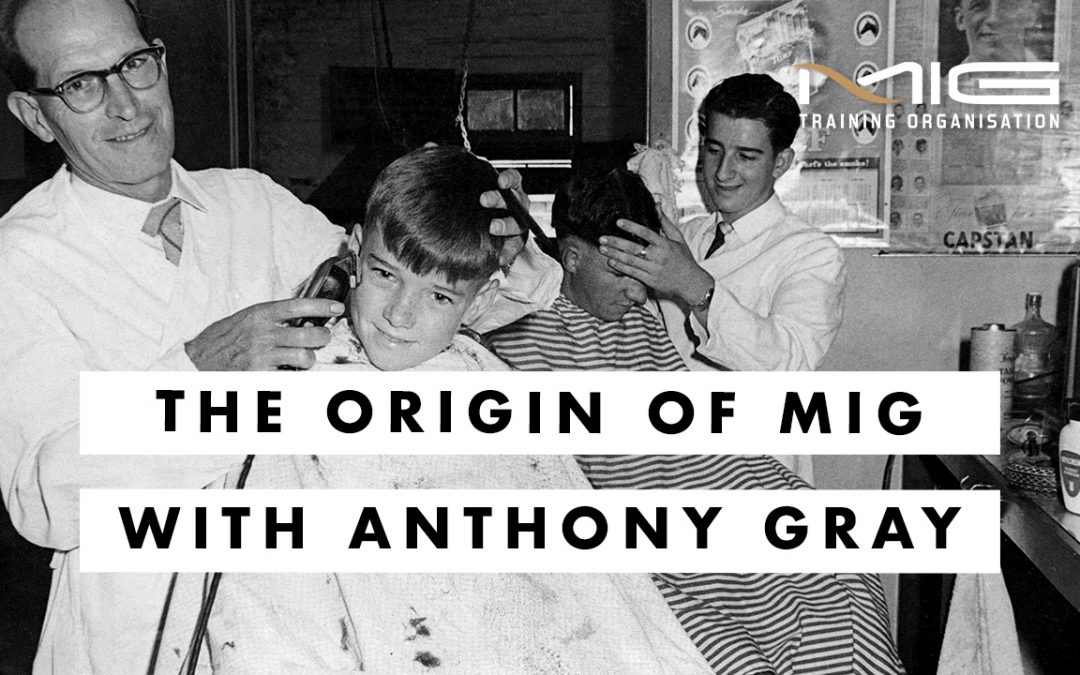 Often times, when we show people around the college, they ask about this wallpaper that is in our barber shop. This really tells a story of, I suppose, my family and then really the history of our business. So this is a photograph of my grandfather’s two chair barber shop.

Now, it was traditional in every sense of the word, you can just see in the background, the pool hall out the back. The barber shop was the tobacconist, and as family legend goes, my grandfather was also the SP bookmaker. So this photograph has my Grandfather and Dad in it.  Dad’s 76 now, but he was probably 14 or 15, in this photograph, just starting out his apprenticeship with my grandfather. So leaving school after year eight and then moving into apprenticeship, he really started to build his career from an early age.

From there, it took him to Brisbane. He opened on the smell of an oily rag his own barber shops and build his own barber businesses and growing up we used to love to go into the barber shops, and to be able to interact with all the other barbers and have such a wonderful time. And Dad also was at the forefront of the industry. He was Queensland hairdresser the year in 1971. And then, as hair went long, and the unisex salon offering really took off, he retrained himself, and then owned hairdressing salons all through the 70s while I was growing up.

It was one of those things really, though that, education was always a big part of what he did. He always had apprentices, always employed apprentices, and was always keen to impart that knowledge on to the next generation, just like his father had done for him.

I suppose that’s where the seed of education came and obviously raising a family, growing a business in hairdressing has its ups and downs. So following winning a service award, Dad then thought then here is opportunity to do some education. So he started with his brother to sort of work up and down the eastern seaboard, delivering education in retail and service and those types of things.

That really was the, I suppose the catalyst for for MIG as it is today. Once that all took off, and the TAFE system in Queensland opened up to private providers, it was his opportunity to really jump into the unknown and start to build a college.  So having a salon currently operating and taking one to three apprentices.

Now some 30 years later, with my involvement, probably for the last 17 years helping to direct and run the business, MIG is what it stands at today. And and we’re really proud of our history. And it’s something that that I suppose is just part of our DNA. We really love working with all the apprentices and the salons and barbershops that we that we now work with and seeing them do what our family have been able to do for others. And that’s really build people’s lives and careers through a career in hairdressing. We’d really love the opportunity to work with you.

And if you’d like to find out about our method and how we do things, it’d be great to connect and great to have a chat.